Potential for what? Executives often push back on measuring “potential” because they doubt one’s ability to measure it, and are hesitant to make people-decisions based on it. Yet they do so anyway — they make talent calls, deciding who gets what break-out assignment or the next promotion — without any data.

Few decisions have more impact on a career, or on the success of a company, than determining who will take on leadership roles.

A few years ago I spent some time in Silicon Valley, meeting with venture capital titans like Kleiner Perkins, Redpoint, Mayfield, and others.  I was surprised by one consistent theme: while venture capitalists bet big dollars on great ideas, more importantly, they bet on the “entrepreneur”. These are the inventors who are passionate and committed to getting a solution that works in the market. Many times that initial great idea morphs – it is tested, adjusted, stretched, developed and evolved in the process of coming to market and reaching scale. Sometimes the initial solution is even rejected outright, but the core idea and the drive to get it right fuels the confidence of the investors to continue to develop it.

So it is with Leadership Potential.

A leader’s strong performance to date is like the inventor’s great idea. It catches the attention of senior management. But is past performance enough to trigger a VC-like investment of time and resources? The future, while unknown, will predictably test that leader. How will she adjust, stretch, develop and evolve in the face of increasing complexity and challenge?

Gaining insight into her potential can increase the likelihood of making the right call. Potential can be identified. It can be measured. That measurement should be used to shape the investment of time and resources to develop that leader, and to build a talent bench of ready leaders.

What is Leadership Potential?

Ask any thoughtful leader, and he will typically have a point of view on potential (often reflective of his own experience). You may hear something like “You can tell a leader has potential because he has vision…or charisma…or smarts…or tenacity…” Or maybe this response: “I can’t describe it, but I know it when I see it.”

Research is helping us describe it and measure it. Silzer and Church (2009) report potential can be measured by cognitive ability and personality. 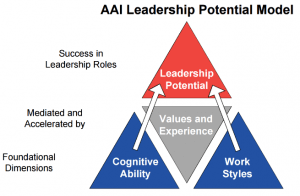 Leadership potential is based on foundational, intrinsic attributes of a leader. These foundational dimensions – namely cognitive ability and personality (or work styles) – are then mediated by values and experiences shaped by extrinsic forces. Finally, these variables are applied in the context and culture of the organization which determines success in leadership roles.

Even so, cognitive ability alone is not enough of a predictor of Potential. Personality is an equally foundational element. How leaders engage with their motivations, their work, and their co-workers, and what work behaviors they demonstrate, directly contribute to – or derail – their success. The Harvard Business Review reports that intelligence alone is not enough to identify potential (Fernhandez-Araoz, 2014). Most leaders who “fail” to progress do so not because of cognitive concerns, but because of derailing behaviors or fit issues with the culture of their company. Zenger and Folkman (2009) studied 450 Fortune 500 executives and over 11, 000 leaders to identify the 10 most common leadership shortcomings (which led to firing, or ranking in the bottom 10% in 360 feedback). Eight of the ten fatal flaws are based in personality/work styles. Derailing behaviors are related to personality factors, or work styles, that can be identified and measured.

These foundational dimensions of cognitive ability and work styles are the basis for identifying leadership potential, but they alone are insufficient for determining the potential of a given leader. Potential is also mediated by experiences that shape that leader (e.g., an expatriate assignment, owning a P&L, leading a business turnaround, etc.). Potential is also influenced by that leader’s values (e.g., passion for the content of the work or mission of the company, declining a relocation assignment while children are in high school, etc.).

Talent review discussions – with or without using a 9-Box type format – are useful in bringing talent decisions forward. However, aside from historical performance ratings, they have a dearth of data, and are often highly subjective. There are ways to measure potential that can bring objectivity and comparability into these discussions.

How do you measure Leadership Potential?

There are several assessments aimed at identifying potential.  One concept gaining attention is called Learning Agility, which is a personality-based assessment of an individual’s attitude towards continuous and flexible learning approaches. It is felt that people who are assessed high on Learning Agility have the right attitude towards continuous learning and are more willing to deal effectively with ambiguity and change.

In our fast-paced world, those able to deal effectively with ambiguity and change have an advantage over those who are not. But does that also mean they have high potential to be successful as leader? As we’ve discussed, there is more to Potential than just learning and adapting.

Another recently developed assessment tool that is showing great promise is the Leadership Potential Report (LPR). Rather than using Learning Agility as a proxy for Potential, the LPR directly assesses the cognitive ability and work styles (or Behavior Potential) of the leader, to provide a leadership potential profile and score (https://aai-assessment.com/products/advancement-potential).

The Leadership Potential Report gives equal weight to an individual’s Leadership Behavioral Potential using these 4 personality facets (anchored to the Big 5 and aligned in part with Learning Agility) and 3 facets of Cognitive Ability.

How do you use Leadership Potential?

Regarding potential, we often had no data. I’ve used nominal sorting to bucket leaders into categories, or Company Values ratings from performance reviews, or descriptive criteria to have the leaders’ managers sort them before coming into the talent discussion. None of these were objective, nor did they provide much comparability across leaders. In some cases, the assignment of potential may have had more to do with how well the manager presented the leader than with the actual potential of the leader being discussed. 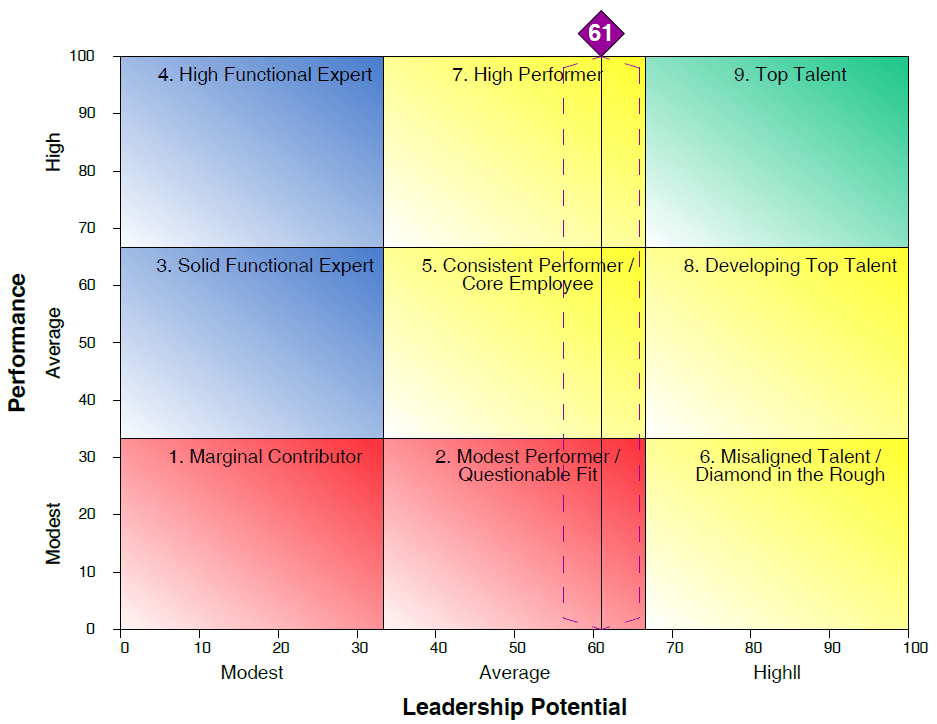 When using the 9-box for discussing talent, the LPR can introduce an objective score to represent the Potential of each leader, based on their assessed cognitive ability and work styles. Clearly, it is a grand over-simplification to reduce the future capacity of a talented leader into a single score. However, providing an objective and valid data point, which can be directly compared to other leaders, is a significant step forward in improving the quality of the talent discussion.

After completing the talent assessment discussion and aligning on Top Talent – those leaders with high potential and high performance – the organization can now focus its development resources to accelerate the development of their Top Talent. (Watch for a future article on practical steps to develop Top Talent.)

Talent decisions get made in every organization. Some use performance data to make these calls. Some use gut feel. Some have a long-standing, robust talent assessment process, while others are just discovering a need to bring process discipline to this work.

Leadership Potential is a profound, underlying variable that can help predict future success. It is founded in cognitive ability and personality traits, which can be measured. Tools like the Leadership Potential Report can measure this, and when used in the context of a talent review process, improve the objectivity, validity, and success of the talent assessment process.

In short, you can gain confidence that you are making the right call when tagging leaders as “high potential”, and accelerating the development of those most likely to achieve career success.

Silzer, R. F. and Church, A. F. 2009. “The Pearls and Perils of Identifying Potential.” Industrial and Organizational Psychology: Perspectives on Science and Practice, 2(4), 377-412.